The ACLU of Ohio nominated David A. Goldberger for the Norman Dorsen Presidential Prize for his lifetime contribution to protecting our cherished fundamental freedoms. Professor Goldberger has been committed to defending constitutional rights, especially the rights to freedom of speech and assembly, for over 50 years. Congratulations to David on receiving such a well-deserved award.

Professor Goldberger always knew he wanted to make a difference, but when he chose to attend the University of Chicago Law School, he could not have known the impact he would make on protecting First Amendment rights for everyone and the monumental effect the cases he argued would have on his life. Four cases in front of the United States Supreme Court, a number of civil liberties victories, and decades later, Professor Goldberger is still just as committed to protecting constitutional rights — even taking on pro bono civil liberties cases for clients unable to afford counsel. 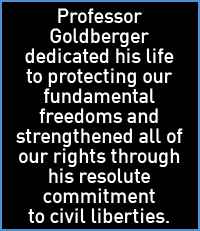 Early in his career, Professor Goldberger served as the Legal and Legislative Director for the American Civil Liberties Union, Illinois Division. He is most well-known for the 1977 case National Socialist Party of America v. Village of Skokie (obligating state courts to provide expeditious review of injunctions against public assemblies). The case began when nazis sent requests to several Chicago suburbs, including Skokie, seeking permits to hold a rally in their towns. While most towns ignored the request, Skokie banned the rally and put laws in effect that would ban most political rallies, not just the rally requested by the National Socialist Party.

The decision to represent the National Socialist Party was a wildly unpopular move as the suburb had a large Jewish population, including many Holocaust survivors. Professor Goldberger admits that this was the most difficult case of his career, but to this day he believes it was a critically important case to take. The case made it all the way to the Supreme Court of the United States, and by defending what many deemed to be highly unpopular speech, Professor Goldberger helped protect free speech for all of us. It took someone truly committed to the core of free speech rights to take on this case, and Professor Goldberger was unwavering in his belief that the ACLU should take cases to guard our freedoms — even when they aren’t easy.

Leading Expert on the Freedom of Assembly

Over the years, Professor Goldberger has remained steadfast in his belief that we all have an obligation to make a difference where we can. When he isn't teaching classes or consulting on or taking cases as a volunteer attorney for the ACLU of Ohio, Professor Goldberger serves as one of ten experts on the Organization for Security and Cooperation in Europe (OSCE)/Office of Democratic Institutions and Human Rights (ODIHR) Panel on Freedom of Assembly. This role has taken Professor Goldberger to a number of different countries where he contributes to discussions on best practices for monitoring assemblies and how to combat obstacles to freedom of assembly. In addition, he reviews legislation related to the freedom of assembly, and presents on related subjects including the Handbook for Policing of Assemblies. Professor Goldberger also co-authored the Guidelines on Freedom of Peaceful Assembly which were issued in 2007 and endorsed by the European Commission for Democracy through Law of the Council of Europe (Venice Commission) in June 2008.

Professor Goldberger has dedicated his life to protecting our fundamental freedoms and has strengthened all of our rights through his high impact cases and resolute commitment to civil liberties.

— Above photos courtesy of David Goldberger and The Ohio State University. —

Below are photos from the award ceremony. 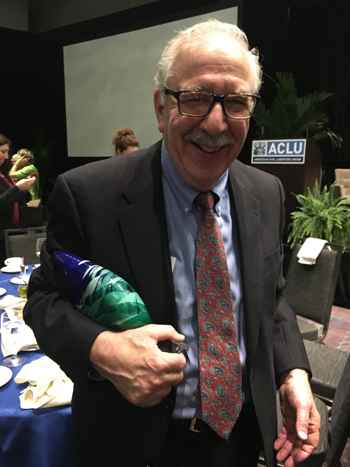 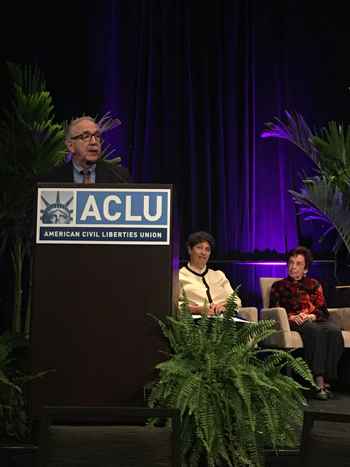 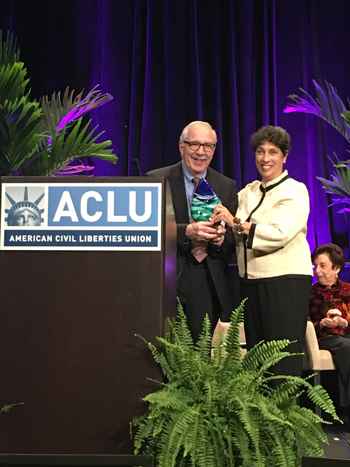