The death penalty is nothing more than the modern version of the most shameful, vengeful, mob violence this country ever produced—a racist policy that cannot be fixed and must be abolished for Ohio to have any hope for justice.

The same barbed line runs through time and space: from the vigilante lynch mobs of Ohio’s ugly past, to Ohio’s modern death chamber. The method may have evolved—hanging by the neck, the electric chair, firing squads, the gas chambers, and, now, “lethal injection”—but the core brutality of the act and its inherent racist nature remains as true today as it ever was. By any measure, the noose and the needle are disproportionately racist and unconstitutionally cruel.

Nearly three-fourths of national lynchings between 1882 and 1968 were of Black Americans, despite being no more than 15% of the population. And even though most associate lynchings occurred in states that made up the former Confederacy, according to the Equal Justice Initiative, at least fifteen Black Ohioans were lynched in the same horrific manner. Ohio’s death penalty shares the same shameful, racist history.

And the modern death penalty is just as racist. Since the state resumed executions, 19 Black Ohioans have been executed. Despite making up only 13% of Ohio’s population, nearly sixty-percent of those on Ohio's modern Death Row are Black—that’s 78 Black Ohioans awaiting the needle. This issue is rooted in a racist history, but the situation is urgent.

The injustice is equally clear when looking at the race of murder victims. According to Ohioans to Stop Executions, “more than 70% of the people on Ohio’s death row are there for the murder of a white person, even though more than half of all homicide victims are black.” And capital crime defendants “charged with killing a white victim in Ohio are twice as likely to receive a death sentence as those charged with killing a black person.” From whatever angle you choose to view it, racism is baked into the death penalty.

Martin Luther King Jr. said that “capital punishment is against the better judgment of modern criminology, and, above all, against the highest expression of love in the nature of God.” It remains true in this 2022 iteration of Black History Month. The death penalty is nothing more than the modern version of the most shameful, vengeful, mob violence this country ever produced—a racist policy that cannot be fixed and must be abolished for Ohio to have any hope for justice.

Our partners on the #NoDeathPenaltyOH began publicly examining the connection between lynchings and the modern death penalty in a “Nooses to Needles” campaign event in Oxford, Ohio, site of the 1892 lynching of Henry Corbin (one of two lynchings of Black men to take place in Butler County).

The ACLU of Ohio is working to abolish Ohio’s capital punishment system and urges passage of Senate Bill 103 and House Bill 183, bipartisan repeal bills that are currently moving through the Ohio legislature. To voice your support in ending Ohio’s death penalty, sign our Action Alert urging the House Criminal Justice Committee to advance HB 183. 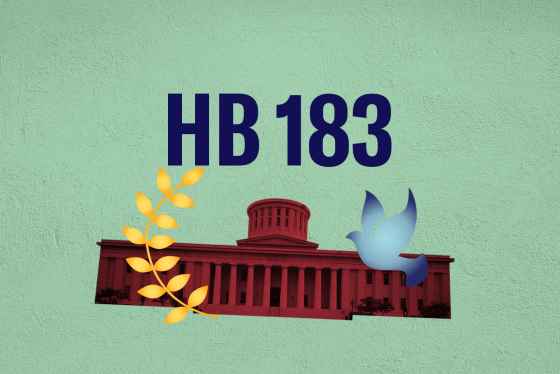