Ten Things You Need to Know about Jamil Smith

"Information is a Right: The Press's Role in Illuminating Mass Incarceration and Race"
With Keynote Speaker Jamil Smith

10 Things to Know About Jamil Smith

1. Jamil is a native of Shaker Heights, Ohio. He attended Hawken School before graduating from Shaker Heights High School in 1993. At Shaker, Jamil was one of the first Minority Achievement Committee, or M.A.C. Scholars, pushing his peers to be academically successful. 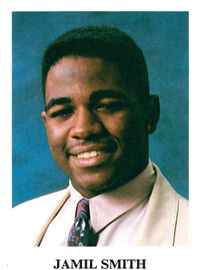 2. After graduation, Jamil attended the University of Pennsylvania to study English. While there, he wrote for "The Daily Pennsylvanian," and was involved in Students Together Against Acquaintance Rape. He also studied English Literature and Theatre at Kings College London.

3. In 2002, Jamil started working for CNN. There he produced the series “9/11: It Changed My Life”, which focused on the testimonials of viewers.

4. Crossing genres, Jamil left CNN to work for HBO Sports and then as an Associate Producer for the National Football League. With the NFL, he produced four half-season highlight films for his own hometown favorite, the Cleveland Browns.

5. Did you know that Jamil is a three-time Sports Emmy winner? His work on NFL Films’ “Hard Knocks” series earned him the awards.

6. After five years with the NFL, Jamil returned to broadcast news. In 2010, Jamil joined MSNBC producing for “The Rachel Maddow Show”, and then “Melissa Harris-Perry”. He contributed to blogs and edited websites, which got a number of his pieces featured in Ebony, the Grio, and the New Republic.

7. During the 2012 election cycle, Jamil wrote a column for Ebony.com entitled "Biden 'Unchained'." In this piece, Jamil examined the use of language, tone, and code-switching in the realm of politics, how they are used, and received in different audiences.

9. In 2016, Jamil combined his experience in print and on-air media as a Senior National Correspondent for MTV News. He co-hosted the weekly political podcast, The Stakes, in which he has interviewed social justice and civil rights leaders like filmmaker Ava DuVernay, and U.S. Representatives John Lewis (D-GA) and Maxine Waters (D-CA), among others. He covered the 2016 presidential election and hosted segments on broadcast cable, using most of his skills to target and engage younger audiences.

10. Jamil has a dynamic personality and is a thoughtful, sincere writer who now works independently, contributing to the Daily Beast. Jamil has also been recently published in Esquire, BuzzFeed, Vanity Fair, among others. His pieces and commentary educate and entertain over 116,000 followers on Twitter and countless fans across mediums.

You won't want to miss Jamil Smith's keynote speech, "Information is a Right: The Press's Role in Illuminating Mass Incarceration and Race" at our 2017 Annual Likover Lecture. Register today!