This month, we commemorate the 50th anniversary of the March on Washington for Jobs and Freedom. Today, the march is remembered primarily for Martin Luther King, Jr.’s “I Have a Dream” speech. But for many activists, it represents something even bigger: the high water mark of a movement that inspired generations of future activists to spend their lives fighting against hate and poverty wherever they find it. 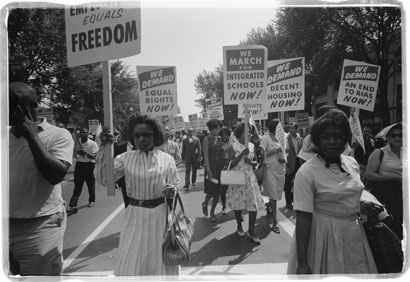 On August 28, 1963, more than a quarter of a million people descended upon Washington, D.C., in what became one of the largest civil rights rallies in history. A complex, sometimes uneasy coalition of civil rights, labor, and religious leaders known collectively as the Big Six organized the march.

They were joined by a list of popular celebrities including Bob Dylan, Joan Baez, James Baldwin, Harry Belafonte, Marlon Brando, Sammy Davis Jr., Lena Horne, Paul Newman, Charlton Heston, and Sidney Poitier, all of whom lent their names and their voices to a movement that was considered very controversial in the minds of many Americans.

Millions tuned in to watch the events unfold on television, and some predicted a riot. The U.S. government prepared for the march by readying a small army of troops. Meanwhile, the city of Washington, D.C., banned the sale of alcohol, and Major League Baseball cancelled two scheduled games at the brand new D.C. stadium.

But there were no riots on August 28, only songs, speeches, prayers, and calls for the United States of America to live up to its promise of liberty and justice for all. And while the march was not universally acclaimed, it represented a major victory for the nonviolent approach championed by Dr. King. It also helped the Kennedy administration build valuable public support for the legislation that eventually became known as the Civil Rights Act of 1964 and the Voting Rights Act of 1965.

Fast forward five decades. Our nation has made significant progress, but there is still so much unfinished business.

As the Economic Policy Institute illustrates, the men and women who marched in 1963 demanded equal access to public accommodations, employment protections, and basic voting rights. However, they also demanded better housing, better educational opportunities for their children, a solution for rampant unemployment, and a national minimum wage that would nearly double today’s $7.25 when adjusted for inflation.

Today, many of these basic demands remain unaddressed. In fact, the U.S. Supreme Court recently took us backwards, striking down a key provision of the Voting Rights Act despite numerous blatant efforts to suppress the African American vote in the 2012 presidential election.

And so our struggle continues.

The American Civil Liberties Union played an important role in the early civil rights movement. Many ACLU members attended the March on Washington, and the organization fought a number of key legal battles on behalf of the movement before and after 1963.

Through our continued work on these and other important civil rights issues of today, we hope to honor the memory of the thousands of brave activists who came before us, ever mindful of their beautiful dream and their promise that “1963 is not an end, but a beginning.”

On August 23, the First Unitarian Universalist Church and the Columbus Folk Music Society will commemorate the 50th Anniversary of the march with an event featuring songs, film footage, photography, and memorabilia from the period. Visit the event listing for more information.

What is lame duck and how might it affect Ohioans?