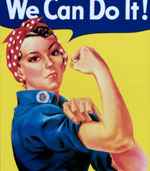 I was unpacking my literature bag at the sign-in table when a man approached me and shook my hand.

“You know,” he said, picking up a bust card, “the first check I ever wrote was to the ACLU. Check number 101. That was a long time ago now.”

I thanked him for his contributions and commitment. “You are how this work gets done,” I said. We talked for a little while until the meeting started.

I was in an office building in north Columbus for the monthly meeting of the Humanist Community of Central Ohio. The HCCO is made up of atheists, agnostics, and rationalists who gather to discuss acceptance of non-believers and social justice issues. They requested a speaker to present on equal pay and gender-based wage discrimination. I titled my talk “The Culture and Politics of Pay and Gender,” because it seemed that you could not discuss women earning 77 cents for every male dollar without bring in all of these issues.

While preparing my presentation I visited the MeetUp.com page the group created for this event. Someone had posted several comments about this discussion, calling for data to back up claims about pay and gender. “Otherwise,” he said, “we would just be swapping opinions.” I asked the organizer about these comments, and he replied that this person had been posting on their events, but never shows up to any meetings. I was a little disappointed he would not be there, because the data had a lot to say.

I talked about research documenting the increase in female musicians in major symphony orchestras in the U.S. In all cases, the proportion of women increased after the introduction of blind auditions, where musicians performed from behind a screen. I also pointed to a 2012 double-blind study, where 127 randomized university science faculty rated female applications for lab managers as less hirable and deserving less starting salary. The only difference between the resumes they evaluated was the names ‘Jennifer’ or ‘John.

Then I moved on to legislation around equal pay, including the 2009 Lily Ledbetter Act and how the Paycheck Fairness Act died in the U.S. Senate for the third time in 2014. Finally, I brought up Hobby Lobby, and the contested closing of Toledo’s last abortion clinic. These pieces of culture and politics can not be separated from the data and causes of the wage gap.

The group assembled that day asked lots of questions, and shared their own stories about gender in the workplace. Whether asking for raises, accessing childcare, or being discouraged from discussing wages, we came back to a few central themes. Know the law and know your rights. Advocate for yourself and advocate for others. And while you may not remember your check number 101, the next one you write could go toward a mission that brings all of this together.

A Conversation with Repro Rights Expert Professor Jessie Hill on...

Here’s how Anti-Choice Lawmakers Waged War against Abortion in Ohio...