That age-old protesters’ rallying cry has been echoing across the country since November 24 when a grand jury in Ferguson, Missouri, failed to indict the police officer responsible for killing Michael Brown. The following day, people in several Ohio towns and throughout the nation gathered in protest. Representatives from the ACLU of Ohio attended rallies in Cleveland and Columbus to stand with local activists calling for justice.

Calling for Justice in Cleveland

Cleveland demonstrators wanted to show city officials that enough was enough—no more legalized killing of the black members of our community.

Puncture the Silence–Stop Mass Incarceration, the key organizer behind last week's event, advertised the demonstration as a way to honor the lives of Michael Brown of Ferguson and local citizens Tanisha Anderson, and Tamir Rice, who were shot and killed by the police in their respective cities. They also wanted to provide Clevelanders an opportunity to speak out against the systematic racism entrenched in our law enforcement and criminal justice system. 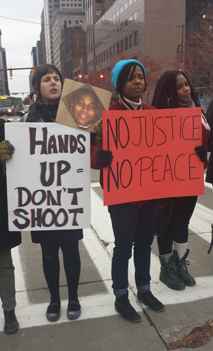 The protest began with a modest amount of people in Public Square. That amount grew rapidly, so much so, the protestors formed a circle around the intersection of Ontario Street and Superior Avenue that continued to the Cleveland’s Shoreway, temporarily shutting down the major freeway.

Cleveland showed its strength as a community with a peaceful, cooperative, and diverse protest. Present were people from every age group, gender, ethnicity, and income level. For many, the event served as an opportunity for Clevelanders to grieve together, to support each other, and to show the world that we will not tolerate any more unnecessary murders.

The call for justice did not end at Public Square, though. Hundreds continued their protests at Cudell Recreation Center, where the city officials hosted an open discussion on police and community relations. Democracy was on fire as the public demanded answers about police accountability and training and how the city would handle the recent death of 12-year-old Tamir Rice.

In other words, Clevelanders truly flexed their activist muscles.

Tell the Department of Justice to ban racial profiling by police.

As protesters took to the streets along the Lake Erie coast, and shut down I-75 in Cincinnati, a crowd gathered in Franklin Park on the Near East Side of Columbus at nightfall. They assembled to stand in solidarity with those in Ferguson, in Cleveland, and all across the country. But their presence was more than symbolic.

This event, led and organized by people of color, came with a set of local demands. Organizers reminded the crowd that the rate of police-involved shootings in Columbus outpaced that of far larger cities. They carried a letter to the Columbus Police Department, demanding the city establish a civilian review board, and denounce the no-indictment verdict in Ferguson.

The crowd moved west through the neighborhood, traveling one-and-a half miles to the CPD Office of Internal Affairs. People stepped out of corner stores and stood on their front steps in the cold to cheer as the march went by.

The only tense moment happened when the protesters arrived at their destination. With hands raised, they faced eight mounted police officers on the other side of the street as a helicopter circled overhead. The mounted patrol immediately left the area and the letter was delivered without further incident. 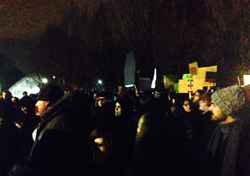 The conversations since the grand jury decision and the death of Tamir Rice are often about details. But whether hands were up or down, America has a problem with race. Regardless of orange caps on toy guns, America has a problem with police shootings. This was underscored this week with further protests as well as the findings from the U.S. Department of Justice investigation of the Cleveland Police Department use of excessive force.

Conversations are crucial, but they need to address why men of color all over the country are more likely to be arrested and killed by police. They need to address the real problems in Ferguson and elsewhere. They must tap into what resonates with communities as these protests take to the streets.