It is already incredibly difficult for people leaving prison and jail to succeed on the outside. They must contend with criminal records that follow them at every turn. It prevents them from getting certain jobs, or even living in certain apartment buildings. The number of collateral consequences they face—from obstacles in educational opportunities to prohibitions on entering certain trades—keep success out of reach.

Unfortunately, this isn’t where it ends for many Ohioans leaving jail. They are also saddled with hundreds, and many times thousands, of dollars’ worth of debt just because they were incarcerated. These debts follow them for years, ruining their credit, and in turn making employment and housing even more difficult. Access to basic necessities like food, clothing, and transportation, are hard to access too. Peace of mind is shattered, and their ability to cope is flimsy. How can anyone be expected to successfully re-enter society with the odds stacked against them like this?

This is not a hypothetical situation. Counties across Ohio are sending people spiraling into this scenario with pay-to-stay policies.

Do the crime, do the time. But wait, there’s more…

Across Ohio, people are billed for time spent in jail called pay-to-stay fees. These are typically charged as daily fees or booking fees, and counties can charge wildly different amount.

Previously, no one in Ohio had looked at exactly which jails were charging these fees, and how much they were charging. Our new report is the first full analysis of all pay-to-stay jail fees at full service jails in the state of Ohio.

Learn more about pay-to-stay fees, how they are assessed, and collected.

While the fees themselves tell one story, their impact on real people reveals the devastating human consequences. 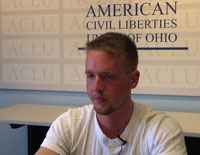 Pay-to-stay fees bring an avalanche of financial, mental, and emotional stress for people after their release from jail. Michael W. of Geauga County depicts his struggles with these debts.

“I was doing pretty well and my credit score was high for my age, but once this occurred, I had lawyer fees. I had to pay thousands of dollars to take care of this and went into debt. When I got out I had to take care of myself, but I didn’t have anything anymore.

“I’ve looked into declaring bankruptcy, but it costs money to even do that. I’m kind of stuck for right now, just barely getting by. I think, if I can get the $700 together then I can declare bankruptcy and all the debt can be just gone and it can finally be off my shoulders. But right now I’m looking at, like, on top of the thousand that I owe them, I’ve got another $20,000 on my cards. And most of it was just lawyers.

“I used to have dreams that I was back in there. And I couldn’t stay at my parents place anyways because I slept in the basement and its cinder block walls. I’d wake up and think I was in jail again and I’d lose it. I couldn’t deal with it.”

Michael’s story is one of many. The details may vary but the common thread of disruption and struggle are the same.

Many of us expect formerly incarcerated people to resume normal lives after serving time in jail. But this assumption neglects the need for continual support to reintegrate successfully. Adding debt onto a person who may already be struggling to succeed is a recipe for failure. These fees don’t add up either, providing very little in terms of funds for counties that try to collect these fees. If a person ends up back in prison or jail or on government assistance, the taxpayers must foot the bill.

This is why the ACLU of Ohio is recommending several important reforms, including:

If local officials are charging low-income people for the cost of their incarceration because their jail budgets are ballooning, the only real solution is to incarcerate fewer people. The irony of pay-to-stay jail policies is that they only increase the number of people likely to end up back in our criminal justice system. It is unrealistic and dangerous to expect that anyone could fund their jail on the backs of poor people.

Pay-to-stay fees are a terrible deal for taxpayers and for the people who must pay them. Officials increasingly talk about the need for new laws and policies that will reduce mass incarceration. These fees are one of the first places they should start. Let’s end pay-to-stay jail fees and give people coming back into our communities a real opportunity to turn their lives around.