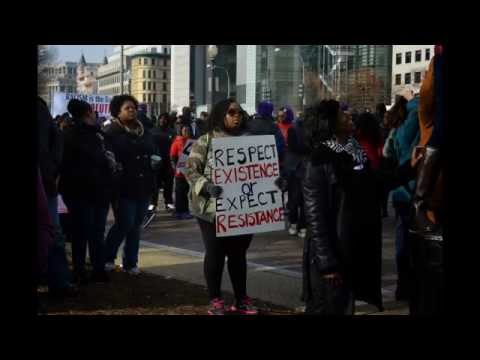 Photograph courtesy of Rachel Woods It was pure activism in motion. The call went out and thousands came to have their voices heard by those in power. This past weekend, several ACLU of Ohio staffers traveled to Washington D.C., to participate in the National March Against Police Violence, sponsored by the National Action Network. The event, in addition to other marches and protests in New York City, Chicago, Oakland, and across the nation, was in response to lack of grand jury indictments in the cases of Michael Brown and Eric Garner, as well as the deaths of Ohio natives John Crawford, Tanisha Anderson, and Tamir Rice, just to name a few.

We recommend learning more about current issues involving police practices and smart justice. For more information about protesting peaceably, check out “Protesters: Know Your Rights!” and “What to Do if You're Stopped by the Police.” 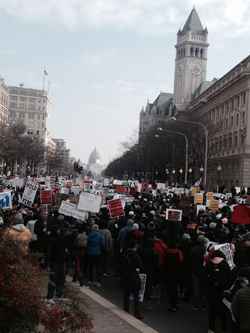 The march, featuring speeches made by the Rev. Al Sharpton and Pamela Meanes, president of the National Bar Association, began around noon and lasted for almost 4 hours. The march route, beginning at Freedom Plaza and ending at a stage near Pennsylvania Avenue and 3rdStreet, NW, was nearly 1 mile long, packed with an estimate of 10,000 people—young and old, black and white, man and woman, and everyone in between. Also in attendance was notable free speech activist Mary Beth Tinker, who created and wore a “stop police violence” armband. 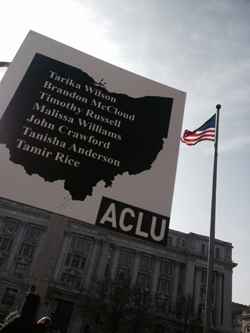 One cannot simply put into a words an event that united thousands of people from all over the country. To feel the power that the people brought, one must hear the crowd’s chants of “I Can’t Breathe!”—“No Justice, No Peace!”—"Hands Up, Don’t Shoot!” To feel the sincerity, one must stare into the eyes of marchers who came with grieving hearts and determined minds. Included in this post are several photos from the event, as well as a YouTube video. The event represents just the beginning of a national journey to demand change and accountability and to honor the lives of those who have died from police violence. We also must remember that future generations will evaluate this moment in our country’s history as either a proactive win or an embarrassing loss for justice everywhere. Ohio can choose to participate in or even help to lead this journey that seeks better police practices and criminal justice reform. We certainly have far too many citizens of color who have died unjustly.