How Many Strikes Until Chief Wahoo is Out? 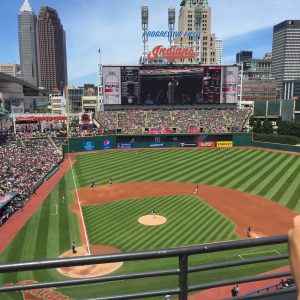 The Cleveland Indians home opener represents spring weather, renewed hope for a World Series title, and an unfortunate social stigma. It has become impossible to overlook the controversy that the Chief Wahoo logo generates as it continues to perpetuate racism against Native Americans. The mascot has a bright red face and grossly exaggerated features, reinforcing stereotypes of Native Americans. The caricature also includes a feather, with no regards to its status as a religious symbol among many Native Americans.

Luckily, for Chief Wahoo, the First Amendment does not take controversy into consideration when protecting private speech. The government should not be able to decide what types of speech are forbidden, even when the speech is as offensive as the Cleveland Indians’ mascot.

Since opponents of Wahoo cannot take their pleas to the courthouse, they are forced to take a more public approach to permanently remove the offensive mascot. They know it must be done on the grounds of morality, not legality.

It is a powerful and inspiring notion that the very amendment which protects the team from using Chief Wahoo as a mascot, also protects the protester’s right to condemn it.

There is no doubt that anti-Wahoo protesters have been effective and organized in accomplishing their mission, and the Cleveland Indians’ presence at the 2016 World Series could not have come at a more fortuitous time. When the international spotlight is on you, it burns hot. The decreased presence of Chief Wahoo on jerseys, hats, and merchandise is a result of an active citizenry speaking out for indigenous people. In fact, the Committee of 500 Years of Dignity and Resistance and the American Indian Movement are set to hold their 25th Annual Demonstration and March at the home opener this year. It is a powerful and inspiring notion that the very amendment which protects the team from using Chief Wahoo as a mascot also protects the protesters’ right to condemn it.  A larger social awareness emerged last year, and it seems like Chief Wahoo’s popularity is finally diminishing.

Neither the city of Cleveland nor the team itself is oblivious to the cries of this growing movement, which is likely why the 2017 Cleveland Indians street banners omit Chief Wahoo entirely. What’s the best remedy to fighting speech you don’t like? More speech.

So the question remains: how many strikes does Chief Wahoo have before he’s out? Unfortunately, only you can answer that question. Undeniable progress has been made to change the Indians’ mascot, but a stronger, cohesive, citizen push is still required.

It is not the government’s job to play language police, so if you disapprove of what’s being said, change the conversation.