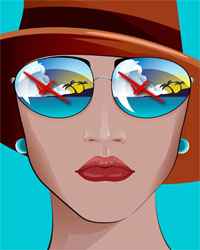 ACLU of Ohio Policy Coordinator Melissa Bilancini recently went under cover at the 2nd Annual Ohio UAS Conference. This is an account of what she learned…

I’m deep undercover at the Ohio UAS Conference. My cover story? “I’m just a part-time social work professor with an interest in drones and other new technologies.”

My real story? As part of the ACLU of Ohio legislative team (and a self-identified tech geek) I want to learn more about this technology born for the battlefield and making its way into our backyards. While there seem to be potential benefits to drones, I am very concerned about individual privacy – especially since Ohio doesn’t have laws regulating use of drones.

The first thing I’ve discovered – these guys hate it when you call these cameras with wings “drones” – they prefer “UAS,” which stands for Unmanned Aerial System, because they feel it has a more neutral connotation. (It might sound more benign, but it’s still pretty sexist.)

So, what is a drone? Any remotely piloted aircraft. The uniformity, however, ends there.

I’ve learned that drones can be as small as an insect, or as big as a 747. They can stay airborne for 2 minutes or 7 – 10 days. Prices range from $300 to several billion. They can be flown by a person standing on the ground within eyesight of the drone, from a remote location, or even from another aircraft. One pilot can control one drone or a flock of drones. (Yes, I said flock.)

I’ll end this first entry with a picture of one of the drones I saw:

This is Lockheed Martin’s Fury 1500. This drone has the largest payload capacity (ability to carry weapons) of runway-independent drones. It can stay airborne for 15 hours, and has a range of 1,500 nautical miles.

In re CVS Pharmacy, Inc. (amicus)

Everything You Need To Know About the Ohio Supreme Court's Criminal...