Just Trying to Use the Bathroom Here!

You might consider going to the bathroom a subject that doesn’t belong in the blogosphere—something so intimate, private, and none of your business. It’s all of those things.

However, for the transgender community, the battle for equality often puts the most intimate parts of life under a public microscope. In Cleveland, that battle has centered on visiting the bathroom.

The Cleveland City Council is considering amending an existing anti-discrimination ordinance that currently allows business owners to discriminate against trans people in the use of restrooms and other gender-designated facilities. To a cisgender (cis) person, or someone whose actual gender and personal identity match at birth, it doesn’t sound too threatening to think of wanting to use a restroom. But the proposed legislation ignited a firestorm of public debate.

At the City Club of Cleveland in late February, a panel of trans activists clarified that debate and its implications. The bathroom ordinance anchored a conversation where the city’s LGBT and allied community asked: what are we doing to protect trans people in our state, and what can we do better?

To learn more about awareness, advocacy, and equality for the trans community, visit the Trans Awareness Project.

Ng and Becker opened the panel with medical and legal lessons around trans issues. They suggested that a lack of education and of legal protection, compound transphobic attitudes.

A first step in realizing full equality for trans people is to know the language and use it properly:

Using the language not only allows us to understand identity, but to show respect for trans identities. But discourse is only a beginning.

Transgender Americans face legal discrimination in many facets of everyday life, including housing, employment and public accommodations. Neither federal nor Ohio law affords full protection for trans people, so cities like Cleveland have supplemented with laws of their own. Municipal efforts, though, are an incomplete solution. They offer inadequate remedies compared to what a comprehensive state or federal law could provide. Also, local anti-discrimination ordinances would not protect trans people outside the municipality. 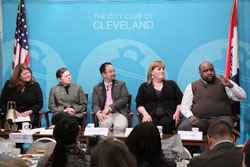 Along with educational and legal advances must be social ones. Darius Stubbs and Stacey Parsons, representatives of the transgender community, guided the discussion.

Laws are important beyond legal implications, especially when they acknowledge a group of people as full citizens. A law often leads individuals to reconsider personal attitudes.

The panelists commented that as attitudes change, there will be some fear or “growing pains.” They stressed one way to help people overcome that fear is reinforcing the reality that trans people are people. When someone you love comes out to you as trans, Stubbs advised, treat them how you treated them before. Compassion and individuality can dilute fear.

Addressing backlash to the bathroom ordinances, Parsons also encouraged people to examine their own fears. Her statement reveals how much of transphobia is rooted in irrationality: “What is the issue?” she asked, “I’m going into the bathroom…to go to the bathroom.”

Both Stubbs and Parsons stressed the need for involvement and an integrated front in this fight: forceful laws and public policy are driven by individuals working together.

The battle for transgender equality has been prominent in the media these past few years—tragically, too often through the prism of violence. Going to the bathroom or even trying on clothes in a store is a part of life that cis people take for granted. But for trans people, basic, private parts of life can become spaces of fear—unless the entire community steps up to overcome that.

Ohio has seen more than enough violence against trans people to acknowledge the immediate need for legal protections with teeth. As the panelists identified, certain actions need to take place immediately. Now’s the time to join them in fighting for change.

Trans Folks Born In Ohio, Here’s How To Finally Correct The Gender...

FAQ: Correcting the Gender Marker on an Ohio Birth Certificate