Love Wins in Ohio and the Nation

Today, Friday, June 26, the Supreme Court of the United States ruled that state bans against same-sex marriage couples are unconstitutional.  In other words, today, for the first time in history, our country must recognize—everywhere—that love is free.

Here at the ACLU of Ohio, we are absolutely ecstatic. This historic decision means same-sex couples will soon have the freedom to marry and their marriages recognized anywhere in America. This ruling will bring joy to families, and a final nationwide victory to the decades-long freedom-to-marry movement.

Come join the celebration!  Locate a Decision Day party near you!

A Great Day…For Everyone

The cornerstone of marriage is love and commitment, and there simply is no reason why same-sex couples should be excluded from this type of bond. Such a ruling means every American has the freedom to marry the person they love. That’s a great thing.

Contrary to the scary predictions, the 37 states that already have marriage equality have proven that when LGBT people share in the freedom to marry, families are helped and no one is hurt.

Read our previous blog, “We Need Real Protections For the LGBT Community,” to learn more about some of the threats towards the LGBT community.

Ohio’s ban on same-sex couples from marrying became law in February 2004. Later that year, voters passed a constitutional amendment  mandating that only marriages between one man and one woman may be valid in or recognized by the state. Nearly 62 percent of Ohio voters supported this amendment, demonstrating a statewide majority to support a marriage ban for same-sex couples. Yet by September 2012, only 37 percent supported such a ban. And now here we are: the Supreme Court has officially struck down Ohio’s ban.

If our state has gone through such a significant and profound transformation on our stance of marriage equality in just over 10 years, then imagine how much further we can go in the next 10 years! 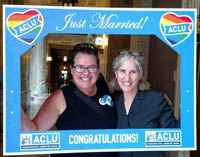 Long Overdue but Hardly Over

The truth of the matter is there are many more battles to fight in order to attain true equality.

Many states have passed a variety of discriminatory laws towards the LGBT community, and those must cease to exist. We need to continue to add to this legacy of equality by reversing, stopping, or preventing laws that allow government officials and business owners to discriminate against same-sex couples and the entire LGBT community.  Did you know that only 18 states have statewide employment non-discrimination laws covering sexual orientation and gender identify? That means in the other 32 states, including Ohio, you can be fired from your job or denied housing simply because of who you are and who you love.

We have a long way to go—for sure—but at least we are well on our way.

Different but Forever the Same 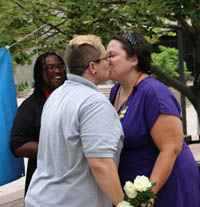 It’s been nearly six years since my friend told me that he is gay. After he told me, we sat together on a park bench, embracing each other, sharing this special moment of honesty and friendship. I will never forget afterwards when we both looked at each other and asked at the same time, “Wanna get something to eat?”

We laughed and then headed for some dinner. And just like that we walked off the same as we always did, knowing that we were two different people, both completely deserving of love and freedom.

Today’s victory will bring joy to hundreds of thousands of same-sex couples and their families who have the same dreams of, and need for, the loving commitment of marriage as any other.

Five Ways to be an Ally During Pride Month – and Beyond

Protecting Intersex Individuals in the Fight Against Anti-LGBTQIA+...

Here’s Why An Ohio Court Should Strike Down the Discriminatory...