It doesn’t matter whether you call it local control, disciplinary control, administrative segregation, or restrictive housing, it’s extreme isolation. Putting people in solitary confinement is something the U.S. Supreme Court has deemed “physical and mental torture.”

Since 2012, Ohio has operated a tiered system in which prisoners are given a level ranging from 5b down to 1. Levels 5b, 5a, and 4b are solitary confinement.

What Happens in Solitary?

The theory behind this tiered system is that individuals can move to lower security levels to enjoy more privileges like out of cell time, recreation with others, and more programming. If someone is classified as 5b, it will be two years before they can be with other people, and that’s under the best of circumstances. A recent review of data at the Ohio State Penitentiary shows that only a little more than half increased their privileges within two years.

People with mental illness are routinely being placed in long-term solitary conditions with little opportunity for rehabilitation. If mental health programming happens, it occurs in a cage, handcuffed to a table, or alone in a cell in solitary via a televised recording. 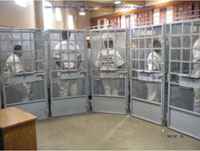 Extreme isolation like what’s experienced in Ohio’s tiered system is:

Costly—In Ohio, the cost of housing an inmate in segregation is twice as much than the general prison population.

Not Safer Inside—There is no evidence that solitary confinement improves safety in prison. In fact, research suggests that super-maximum (super-max) security prisons have a negative impact on public safety.

Not Safer Outside—People are released directly from solitary to the community every year. The ACLU has learned that the Ohio State Penitentiary releases 50 people each year. This means that Ohio communities are responsible for re-socializing individuals who are poorly prepared to return to society.