Then and Now: Censoring Employee Speech

The ACLU has always protected freedom of speech. Throughout history this has dealt with issues that were, at that time, considered uncomfortable.

Our future leaders, millennials, have been identified as the most socially liberal generation yet. So as social conscience is changing, uncomfortable issues are becoming comfortable, and those on the wrong side of history will be pushed out of the mainstream of our national zeitgeist.

But what hasn’t changed with time? The decision by some to censor someone else’s speech.

Around 40 years ago, Richard Aumiller was a University of Delaware graduate student in the Department of Theatre. Immediately following graduate school, Aumiller became the manager of the University Theatre, and was asked to serve as the faculty advisor for the campus organization Gay Community. Local reporters attended a few of these meetings in an effort to shed some light on issues facing LGBT individuals in Delaware. But the story became bigger than the issues because Aumiller, a University of Delaware faculty member, acknowledged he was gay. 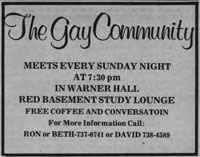 Photo courtesy of University of Delaware

Front page articles were published accompanied by quotes and pictures, not about Gay Community, but about Richard Aumiller. The university was not pleased. The board said it was, "confused and troubled by homosexuals" and confessed “an inability to clearly support Gay Community as a community.” Aumiller, a year-to-year hire, did not have his 1976-77 contract renewed.

“They knew I was gay when they hired me,” Aumiller said, “They fired me because I spoke about it.”

Aumiller’s speech was censored, so the ACLU stepped in and took the case. By the time it was over, Aumiller was granted reinstatement for the 1976-77 academic term, which unfortunately had already come and gone. He received back pay for that same school year, and was awarded for compensatory and punitive damages.

According to the ruling in this case, public school employees are held to a different standard when it comes to their words. Their speech is not protected if their statements: 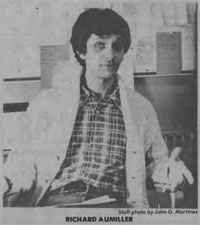 Photo courtesy of University of Delaware

Aumiller did not violate any of these rules. Accordingly, the court concluded that the university’s' interest did not outweigh Aumiller's interest in commenting upon matters of public concern.

Aumiller, who now lives in Central Ohio, has a similar story to that of Keith Allison, an elementary school teacher in Northeast Ohio, and self-described vegan activist, whose contract was similarly not renewed last year when he chose to speak out against animal cruelty and dairy farms. With the ACLU of Ohio’s help, Allison is now back to work teaching students at a different school in the district.

These men were simply discussing issues they cared deeply about, and in both cases, were not asked to return to their educational positions. Aumiller and Allison were not allowed to speak out for what they believed in. They were censored. Why?

Because that belief was not shared by the administrators and board members, and because economic interests were supposedly at stake. There is one other similarity between the two cases. The ACLU fought for these citizens and won.

Aumiller added, "Without the American Civil Liberties Union, I would have been toast."

Dan Rogan is a development intern with the ACLU of Ohio.

It Starts with Awareness, But Trans Ohioans Deserve More