This morning the ACLU of Ohio delivered hundreds of petitions to Judge John J. Russo from residents in Northeast Ohio who support expedited bail reform policies in Cuyahoga County. The petition delivery followed the release of a report from the Cuyahoga County task force on bail, which was released on Friday, March 16. This 22 page report detailed needed reforms to the county’s bail system, and the ACLU of Ohio fully supports these efforts. The task force, which is comprised of current and past members of the judiciary, law academics, and attorneys, recommended numerous reforms including: 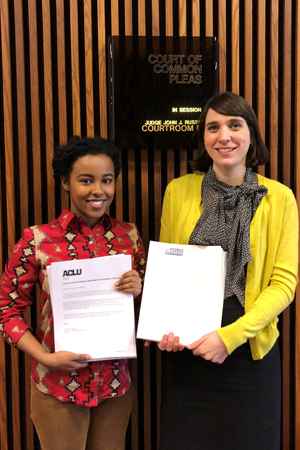 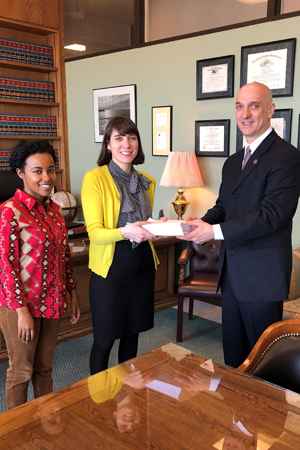 Current practices and the need for reform

Cuyahoga County has 13 different municipal courts that hear misdemeanor criminal cases. Additionally it has a court of common pleas that primarily hears felony cases. Each court does things differently when it comes to setting bail. For instance a person may be picked up by police in one municipality for a certain offense and may be given a personal bond—one that requires no money. However, that same person could be picked up in another municipality, for the exact same offense, and be held on a financial bond that he can’t afford. This creates a system of wealth based detention that can be made worse simply by being taken into custody in a jurisdiction with a high money bail schedule. A county-wide centralized booking system, that includes procedures for uniform bail hearings, is a step in the right direction toward alleviating unfair variations in bonds from one court to the next.

Centralized booking and pretrial services could also help reduce the time delay between arrest and a person’s first appearance before a judge or magistrate. Typically, bonds are set at a person’s first appearance. Depending on which court in the county the person’s case is proceeding through, the time between arrest and being seen by a judge may take as little as a few hours or could take as long as a whole week. The task force recommends a system for county-wide uniform bail hearings and pretrial services that can provide supervised release for defendants, no matter where they were arrested or what court is hearing their case. The task force also recommends that a person’s first appearance take place within the first 48 hours after arrest to facilitate that person’s release and limit the amount of time that person spends in jail when they could be going to work or school, taking care of children, and otherwise providing for themselves and their loved ones. The task force further recommends that a criminal defense attorney be present to staff the first appearances to ensure that defendants have representation during the bail hearing process—something that does not usually happen in most of the county’s municipal courts currently.

The ACLU of Ohio supports the task force’s recommendations, as they mirror some of the best bail practices that other jurisdictions are adopting to successfully reform their bail systems. But the ACLU is not the only group in support of reform. On Monday March 19, the ACLU delivered a letter that enclosed over 500 petitions to local officials and judges, from concerned community members requesting that they take the next steps toward implementing the needed bail reforms. The ACLU of Ohio will continue to urge county policy makers to implement the task force’s recommendations without delay and monitor the results.