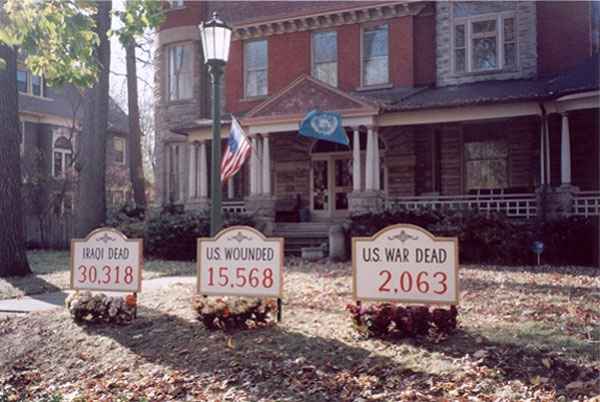 TOLEDO, OH– Today, the ACLU of Ohio sent a letter to John Madigan, Law Director for the city of Toledo, urging him to abandon attempts to cite Toledo resident Jeffrey Nelson for displaying four anti-war political signs in his front yard. Mr. Nelson received a notice from the city’s Division of Building Inspection on Dec. 2, 2006 stating that he must remove his signs within 24 hours or risk incurring a fine.

Gamso went on, “Courts across the nation have affirmed that people have a right to express political views through signs displayed on their property. Time and again, courts have rejected laws that attempt to restrict the number of political signs posted.”

The law specifically prohibits a property owner from exhibiting more than one exterior sign at their residence. The city argued that Mr. Nelson’s four exterior signs were a clear violation of this ordinance.
In the letter, Gamso urged Madigan to resolve the matter without litigation by halting all efforts to cite Mr. Nelson, prohibit the city from citing other residents accused of similar violations, and requesting Toledo City Council to rescind the unconstitutional ordinance as soon as possible.

Gamso added, “All residents should be free to express their opinions on important political issues without fear of censorship from the city. Toledo officials should right this wrong and bring their local laws back in line with the First Amendment.”

Pictures of the signs are available on the ACLU of Ohio website and attached on the second page of this news release.

The nonprofit, nonpartisan ACLU of Ohio has offices in Cleveland and Cincinnati and community and campus chapters located throughout the state. Due to a recent increase in membership, there are now almost 30,000 ACLU members and supporters in Ohio and more than 500,000 nationwide.