Gerrymandering: A Look at Ohio

Ohio Congressional Districts Map, Ohio Secretary of State Democracy fails to work when its people are not represented fairly and equally. But when one looks at the Ohio Congressional Map (full size) through the lens of two colors—red for Republicans and blue for Democrats—the complicated lines make sense. The red and blue map is a classic example of gerrymandering—the manipulation of district boundaries that favors one party over another, often splitting communities apart. Following the 2010 U.S. Census, Republicans controlled the process of redrawing the lines. Republicans gave themselves 12 districts and packed the Democrats into four districts. Before 2000, the control was split between both Democrats and Republicans, leading to a fairer and more equal distribution of seats and votes. However, after 2000, Republicans gained control and redrew the lines to keep returning their majority delegations to Columbus and Washington. In the last two elections, Republicans got 75 percent of the congressional seats in Ohio, with just 55 percent of the vote. 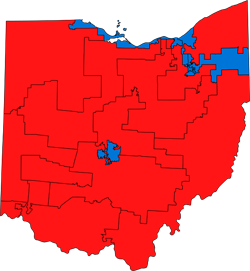 Used with permission, WikiMedia Commons It’s important to acknowledge that this issue is not about Republicans or Democrats, but about doing what’s best for the civil liberties of Ohioans. A possible solution to the gerrymandering state legislature districts is the Ohio Bipartisan Redistricting Commission Amendment (OBRCA) 2015, now known as the Fair Districts for Ohio ballot initiative. The resolution passed both state legislatures with bipartisan support and will appear on the November 3, 2015 ballot as Issue 1. If approved by voters, it will set Ohio on a path to fairer statewide elections. Giving the Minority Party a Voice Currently, the five-member Apportionment Board is responsible for redrawing the state legislative lines. The state board is made up of the governor, auditor, secretary of state, a member from the majority party, and a member from the minority party. If one party controls all branches of government, then the voice of the minority is sidelined. This is evident in the 2000 and 2010 redistricting process, as Republicans controlled all three branches of government in Ohio. Provided Issue 1 passes, the Apportionment Board will be replaced with the Ohio Redistricting Commission (ORC), which would consist of seven members: the governor, auditor, secretary of state, and four members appointed by the majority and minority leaders in the General Assembly. In order for any redistricting plan to pass, four members would have to vote in favor, including at least one Democrat and one Republican. In other words, a redistricting plan cannot be passed without the voice of both parties being represented. More Competitive Elections The hallmark of our democracy is a robust discussion about the issues and challenges that face our communities. Under the current system, Ohioans are voting for the party more so than the person running for office. The current lines have led to the emergence of “safe seats” where the nominee from one party or the other is all but guaranteed election.

The Fair Districts for Ohio initiative will be on the ballot this fall. Be sure to vote for Issue 1 on November 3, 2015.

Issue 1 has the potential of preventing creative redistricting. The amendment would discourage officials from splitting political subdivisions, including counties, municipal corporations, or townships. Hopefully, it will lead to more competitive races, giving Ohioans a chance to hear different perspectives and ideas laid out for the future of the state. Mechanisms to Prevent Gerrymandering Issue 1 proposes several mechanisms that will prevent one party from hijacking the process and will give Ohioans an opportunity to voice their concerns, including:

Issue 1 is by no means perfect. A major flaw of the amendment is that it only applies to state legislative lines and not congressional lines. However, it’s a step in the right direction that will move us toward fairer legislative districts that will more adequately represent all Ohioans and not simply perpetuate power for either political party. Issue 1 is healthy for our democratic system and our civil liberties. The ACLU of Ohio urges you to vote in favor of it on November 3, 2015. Hasher Nisar is an intern with the ACLU of Ohio. Editor's note: This blog was updated August 11, 2015.